The Three Virtues of Go
by Donald Potter

One often sees these three characters written with broad, heavy brush strokes on silk scrolls hanging in go clubs throughout China and Japan. They are taken from the five Confucian virtues: li (propriety), chih (wisdom), jen (human-heartedness), i9 (righteousness), and hsin10 (sincerity).

In Chinese numerology the number five was thought to be most `harmonious', harmony being a frequently recurring theme in much of Chinese thought. There are five key points on the go board. The five constant virtues correspond to the five elements: wood, fire, earth, metal, and water, which in turn harmonize with the five then known planets: Jupiter, Mars, Saturn, Venus, and Mercury.

These three virtues were first applied to go during the reign of Sung T'ai-tsung (976-98), who was passionately fond of the game. The first character, li, occupies an august, noble position in East Asian thought. Something can be discovered about the fundamental meaning of the character by examining its component parts. If one passes a vertical line through the middle of the character, two distinct segments, shih1 and li,2 appear. The left-hand side (here shih, `spirit' or`ghost') imparts meaning and is called the `signific' or `radical.' So here we have a word pronounced li having something to do with spirits -- in this case, sacrifices to spirits or the ceremonies and proper rules associated with those sacrifices. Most Chinese characters are of this type of formation and are called` phonetic combinations'.

Originally, some 3,600 years ago, Chinese pictographs were elemental representations of physical objects. Mu3 was a likeness of a tree with branches and roots, shan4 a picture of a mountain, tzu5 a baby, jen 6 represented a man. A sharp stylus was used to etch the pictures on pottery, bones or shells. As writing brushes became more common during the Shang dynasty (1555-1046 B.C.) and especially during the Chou period (1045-256 B.C.), the pictographs were simplified and conventionalized. Thus tree became mu,11 mountain shan,14 baby tzu,13 man jen.12 Another group of characters, to which li partly belongs, is the ideograph -- a depiction of an idea rather than of a concrete object. An example is the character for `love', hao7 -- a picture of a mother and her child, conveying the idea of `love'.

The ancient ideograph wei8 pictured an enclosed place with a foot (presumably a foot soldier) on either side,15 suggesting the idea of `surround,' `guard,' `protect.' The modern form wei16 means `to surround' or `to protect', but has become a `phonetic' in, for example, the character wei17 (to surround) used in the Chinese expression for go -- wei-chi'i18 (spelt `weiqi' in Pinyin).

The Chinese were making use of phonetic elements in their writing system at least as early as the beginning of the Shang, say 1500 B.C. Since the language abounds in homophones (cf. English sough, sow), it seemed reasonable to adopt or borrow characters depicting concrete objects that had the same pronunciation to represent abstract concepts. For example, the idea of `coming', which is difficult to represent pictographically, borrowed the character lai, which, while having the same pronunciation, actually meant `millet.' Today lai only means `to come.' Wan, meaning `ten thousand,' `many' or `all,' equally difficult to picture, borrowed the character wan, which meant `scorpion'. In very little time the borrowing became appropriation. No one since the Chou period has associated wan with its arachnoid origin.

By far the most common type of Chinese characters is a combination of a phonetic element with an ideograph called a radical, signific or determinative. The wei of wei-ch'i18 has the phonetic element inside and the enclosure element or determinative on the outside. (One of the convoluted ironies of Chinese: the original element was a picture of a foot on either side of an enclosure and meant `to guard,' `to surround.' In order to emphasize its meaning of `surround,' another enclosure radical15 was added to it, wei16 becoming the phonetic. Radicals were added to characters to emphasize meaning, phonetics to suggest pronunciation.)

The formation of the character li (propriety) is, in principle, not unlike that of wei.17 According to the earliest Chinese dictionary, the Shuo Wen (compiled by Hsu Shen, d. 120 A.D.), the phonetic part, li,19 is in fact a sacrificial vessel, or a stand with a vessel on top filled with an offering of meat. Later the spirit radical was added to clarify further that li means sacrifices to the spirits and ancestors, and the ceremonies associated with the sacrifices.

Li comes first in this set of three virtues not only because of its special importance to the Japanese but because of its religious and historical significance for the ancient Chinese. Of the numerous philosophical and historical works in early China, thirteen are designated as classics. Of these, three deal with li: the Li Chi (Records of Propriety), the I Li (Book of Etiquette and Ceremonies), and the Chou Li (Ceremonies of Chou). It is as if we in the West included along with the Bible, Homer, Plato, Aristotle, and Cicero, the works of Emily Post and Amy Vanderbilt, and the syndicated columns of Judith Martin. Are there any Occidental classics that deal solely with propriety?

Of the thirteen classics mentioned, five, The Book of History, The Odes, The Book of Changes, The Spring and Autumn Annals, and The Records of Propriety, form the core. The Li Chi (Records of Propriety) was first translated by a French scholar, J.M. Cally. Among his numerous renditions of li a few are: rite, cérémonial, l'étiquette, politesse, courtoisie, honnêteté, bonnes manières, dignité personnelle, moralité de conduite, and many many others. Although `propriety,' `etiquette,' and the modern English expression `good form' are consonant with the meaning often expressed in the Li Chi, in ancient China li had a moral and religious significance immanent in all usages. A life ordered in harmony with it would realize the highest ideal.

Always in everything let there be reverence; with deportment grave as when one is thinking [deeply], and with speech composed and definite. This will make the people tranquil.

Propriety distinguishes men from brutes. Courtesy, the consideration for the feeling of others, distinguishes gentlemen from the rabble. Confucius said, `It is by the Odes that the mind is aroused; by The Record of Propriety that the character is established; from Music that the finish is received.' (Legge, Lun Yu, BK. VIII, 8). Without genuine warmth, kindness and consideration for the feelings of others, propriety loses its spirit. Confucius further warned:

The second character of the three virtues, chih (wisdom), is as difficult of interpretation as it is of practice. In contemporary usage it means `wisdom,' `intelligence.' The compound chih-hui,20 means I.Q. and chih-li21 means `intellectual power.' The phonetic portion of chih is chih.22 In ancient times the two characters were used interchangeably to mean `wisdom' or `knowledge.' There is, however, once again an inherent ethical force in the classical usage. According to Mencius (372-89 B.C.), the four primary moral constituents of human nature are jen (human-heartedness), i9 (righteousness), li (propriety), and chih10 (wisdom).

Wisdom is the innate knowledge of what is right and wrong. Confucius remarked:

`The wise are free from perplexities.'

That is, they know the difference between right and wrong without needing to reflect.

Go is a gentleman's exercise for the cultivation of the mind. Without employing our minds in thinking about our moves we are offending against one of the four ethical principles as set forth by Mencius. Furthermore, to consider one's move expresses modesty; suggests the strategy of the opponent merits consideration.

Our inner nature seldom admits this.

The third virtue, jen, has nearly as rich a philosophical interpretation as li. Ideographically, the left hand signific represents a man; the right is the character erh24 meaning `two.' It is not a phonetic. It represents man and his moral relation to others.

The great nineteenth century Scottish sinologue James Legge always rendered jen as `benevolence.' In contemporary Chinese the compound ren-ai25 is very common and is most usually rendered as `love' (Greek agape). Many contemporary scholars use the word `human-heartedness' as an equivalent. Compassion, goodwill, humanity, kindness, mercy are all close.

As mentioned at the beginning of this essay, one finds the three characters for the three virtues of go displayed in go clubs throughout the Orient, but of the three -- propriety, intelligence, and kindness -- it is `propriety' that has been held in the greatest veneration. Perhaps more than anything else, this explains the spirit of dignity and consideration that guides participants in what is a competitive game.

(Note: The Wade-Giles Romanization system has been used in this essay.) 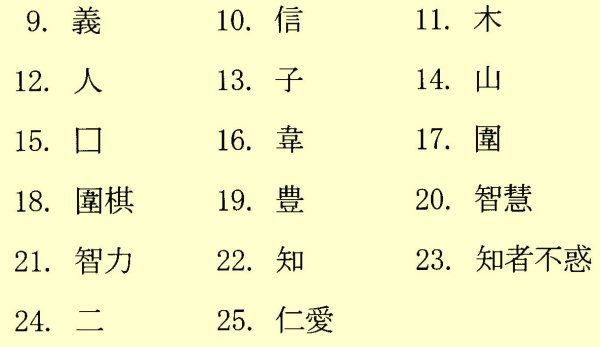